HOW BLOCKCHAIN IS COMING TO SAVE HEALTHCARE?

Cutting-edge concepts like Blockchain technology, artificial intelligence, big data, and automation are running parallel to one another and will inevitably converge to simplify the lives of end consumers.

WHAT IS A BLOCKCHAIN?

The Internet, as we know it today, was constructed by the United States Department of Defense to create a distributed network of computers resistant to central points of failure. The system works off the TCP/IP (Transmission Control Protocol/Internet Protocol) and allows people to transmit information to anyone, anywhere in the world instantaneously and freely. As efficient as this protocol is for sending information across the world, it was not intended as a platform to exchange and transact something of value. This is why sending an email cross-border takes milliseconds while sending a few cents is either not possible or would take days to complete. Enter the world of Blockchain, the technology that could revolutionize payments and how we exchange value across the world.

Technologists often call Blockchain the "Internet of Value," but what does this mean exactly? The emergence of the cryptocurrency Bitcoin in 2009 made the technology widespread, but we must differentiate between the currency and the ledger that tracks it. In its simplest form, a Blockchain is a database and ledger system of transactions. Unlike traditional databases that are stored and maintained on private and centralized servers, a Blockchain is distributed and maintained by hundreds or even thousands of computers all over the world. Money, titles, deeds, artwork, digital identities, and medical records can now be moved, tracked, and stored in digital form on this network. Trust is established--not by governments, banks, or third parties--but by consensus and the collaboration of the entire network.

In a Blockchain environment, all relevant parties share the same ledger. The ledger consists of a series of "blocks" containing individual time-stamped transactions. The blocks are chained together and sealed through advanced cryptography to create a permanent and public record that cannot be altered. In a trustless environment such as Bitcoin, users known as miners act as librarians. These anonymous contributors organize and validate transactions into the network and are rewarded with small amounts of new Bitcoin for their efforts. In a trusted environment such as one bank transacting with another bank, the reward process is unnecessary. All that is needed is consensus among the parties involved.

We are moving into a new wave of technological innovation. Cutting-edge concepts like Blockchain technology, artificial intelligence, big data, and automation are running parallel to one another and will inevitably converge to simplify the lives of end consumers. Blockchain could have a profound impact on multiple industries including global finance, healthcare, insurance, supply chains, and even voting. Below we will look deeper and discover how and why Blockchain could transform different components within the healthcare sector.

Healthcare as an industry is extremely fragmented, especially considering how far technology has advanced over the last twenty years. More often than not, walking into a doctor's office feels like traveling back in time. Consider all of the sensitive data that is transferred between multiple parties inside of the system. Identities, medical records, payments, prescriptions, treatments, analytics, and research are all handled and stored in thousands of centralized databases across the world. Fragmentation isn't the only problem: these databases are typically poorly secured and exposed to hackers. Most recently, Anthem Insurance was compromised and lost the records of 80 million patients. Single points of failure like this can cause significant problems. Blockchain looks to provide solutions to this and other use cases throughout the industry.

The Electronic Medical Record (EMR) has been around since the 1960's, despite a slow rate of adoption within the industry. Digital records were meant to replace paper-based systems by creating new efficiencies and interoperability that were previously nonexistent. However, even though these records are held online, they remain siloed in non-interoperable databases. Accessing them across different hospitals, insurance providers, and doctors can be a vexatious task. Adding to the inefficiencies is the cost to maintain the databases. Individual hospitals store terabytes of information each year, costing millions of dollars to secure. 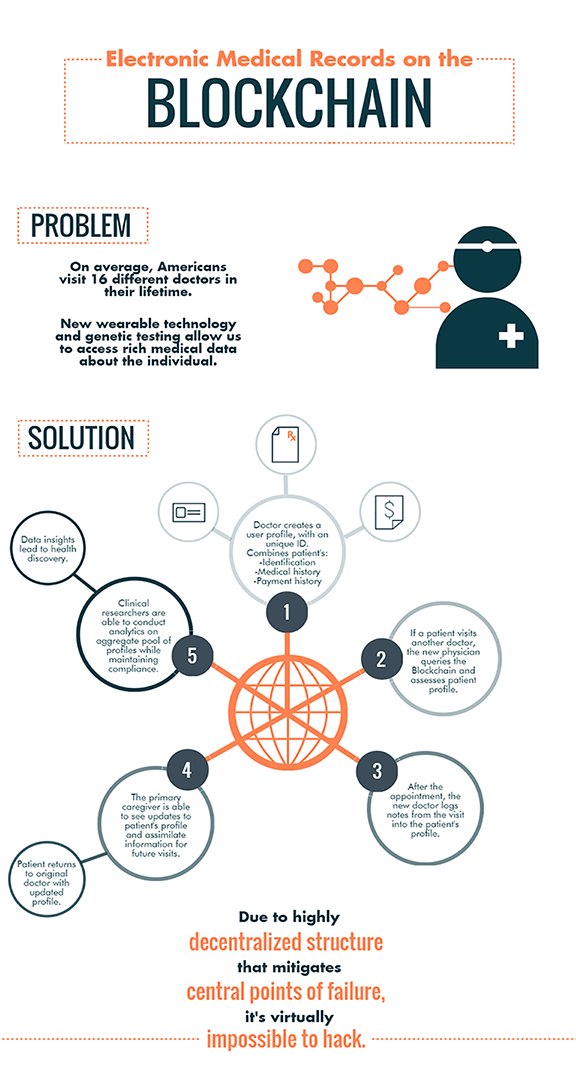 There are four hurdles to creating universal medical records. A Blockchain infrastructure solves each of these pain points.

1: Interoperability:   According to the Premier Healthcare Alliance, a lack of interoperability costs 150,000 lives and $18.6 billion per year. Using Blockchain, entrants across every entity in the medical sector can now share and validate the same ledger and database. This would create several advantages for those using it. Blockchain-based document storing, including the use of smart contracts, would replace physical documents and processes. This innovation would lead to a major reduction in human error as the redundant act of rekeying information is virtually eliminated. There would be no down time in such a system. Private information and updates would be available to relevant parties 24/7 regardless of geographic location or other known barriers. Shared ledgers of truth weren't possible before Blockchain technology.

2: Security:   Medical records contain a wealth of highly-sensitive information. Therefore, storing them in a centrally controlled universal system is a precarious idea. A breach to the database could result in the compromise and theft of billions of records. In a decentralized and distributed environment, this type of mass data hack would be impossible. Patients would be in full control of their own records, providing access to chosen individuals through multi-signature contracts. Private information is never stored or replicated anywhere outside of the Blockchain. A smart contract would allow another party to access and update the content inside of the medical record. After the contract self-executes the terms agreed upon, this outside party would no longer have access.

3: Cost:   A universally centralized platform would cost a prodigious amount of money to upkeep. Hospitals, insurance providers, pharmaceutical companies, and many other parties spend billions of dollars annually to keep their systems up and running in an efficient and secure manner. Running many of these processes on a Blockchain would either be free or require a de minimis per transaction fee. Eventually, these savings would be cycled back to the patient receiving care.

4: Scalability:  Network neutrality means there is no single owner of the network. Participants can easily plug in and out of the database. A neutral network also drastically lowers the traditional barriers of adoption. Creating a distributed platform would enable a decentralized global health network that would tear down barriers the same way the internet did for accessing information across borders. The Blockchain is resilient because it is immutable and validated by all participants. It fosters trust as it grows.

A smart contract is a piece of code that self-executes when certain conditions are met on the Blockchain (think of it as a digital If/Then agreement). As unadorned as this sounds, it could have significant implications across the healthcare sector. Smart contracts could be set up with other peers, organizations, or even machines. The mutual agreement could dictate virtually anything.

For example, it could state that once a particular condition is met, a set of predefined actions occur (e.g., If city 'A' has an earthquake of 'B' magnitude, then 'C' amount of dollars will be allocated to local hospitals and the Red Cross fund instantly). In this particular case, utilizing Big Data Analytics, Blockchain technology and smart contracts would enable governments and insurance companies to immensely speed up their response time to natural disasters.

Imagine giving the most talented Data Scientists in the world access to a pool of medical information, all while protecting the privacy of the individual and granting them a reward at the same time. What kind of medical insights would result from that comprehensive research? This represents another scenario made possible by the Blockchain.

Patients would be given a choice to grant health researchers access to certain personal medical information. To incentivize patients to do this, researchers would reward their sharing by paying a small fee and a smart contract could be coded into the Blockchain stating, "If patient 'W' gives 'X' amount of data to the public health bank, then 'Y' amount of dollars will be sent to wallet 'Z'." From the patient's end, this process isn't much different from granting access to a mobile application that can view and sell your private data online. The difference in this use case is that the patient remains pseudo-anonymous while also being rewarded money in the form of micro-transactions paid into an account through the Blockchain.

This arrangement, which is currently being constructed, would enable researchers to explore vast amounts of new information which would give them a better sense of macro trends forming in the world of medicine. The capability to conduct medical research on an anonymous pool while remaining HIPAA compliant is an illustration of convergence between Big Data Analytics and the Blockchain, representing tremendous opportunity for the general public.

To illustrate the convergence of IoT and Blockchain, let's walk through a use case involving a patient, a doctor, a smart bottle, and a wearable device. The example would work as follows. The doctor prescribes Lipitor to his patient, a medication that lowers cholesterol. The Lipitor is stored inside of a smart bottle that can determine how many pills have been taken based on the weight of the bottle. Two smart contracts are then written into the Blockchain stating, "if patient 'J' misses two days of medication, then a warning alert will be sent to wearable device 'K'."

The second smart contract might state, "if patient 'J' misses an entire week of medication, an alert will be sent to the patient's healthcare provider 'L' and spouse 'M'." The convergence of IoT and Blockchain in this example creates a more trustless relationship between the doctor and the patient while also making the patient more accountable to his/her health needs.

Blockchain technology could provide incredible efficiencies to medical supply chains. Specifically, immutable logs and tracking information that are uploaded to the Blockchain could yield the entire life cycle of a pharmaceutical drug to any relevant party. This could help eliminate the counterfeiting of drugs, especially drugs manufactured in other countries. A study by the UC San Diego School of Medicine stated that potentially one million people die each year due to mislabeled and fraudulently produced medications. Even more daunting, the World Health Organization recently reported that nearly one-third of identified counterfeit drugs contain no active ingredient at all, while more than 20 percent either have incorrect quantities of active ingredients or contain the wrong ingredients altogether.

By using the Blockchain to track the entire lifecycle of a drug from birth to its consumption, a consumer could see where the active ingredients had come from, where they were shipped, and where they were compounded to make the particular medication. Through the distributed database, attaching a digital passport to these basic goods helps certify its authenticity and origin.

Blockchain technology will soon become a center of innovation that enables inclusion across multiple industries for billions of people. The industries most likely to be affected by this disruption are the ones that are most fragmented. Healthcare has not kept pace with technology.

However, with the emergence of Big Data Analytics, artificial intelligence, and Blockchain technology, we are about to see an entirely new wave of healthcare innovation. This will lead to less expensive care, longer and healthier lives, exponential acceleration of research, and a patient-centric healthcare model that we haven’t seen in decades. Companies and organizations across this industry will have two options; adapt or risk being disrupted by technology.

BY Philip Francis, Head of Blockchain Partnership and Scott Roudebush, Brand Marketing Manager at WorldLink US